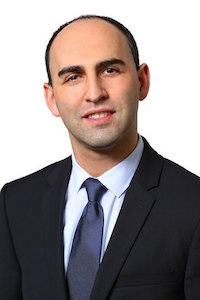 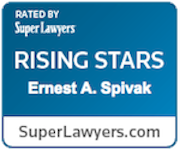 Ernest A. Spivak is a partner at Caesar and Napoli, P.C. Mr. Spivak is admitted to practice law in state and federal courts throughout the States of New York and New Jersey. He has represented injured victims of automobile accidents, falls due to sidewalk defects or improper snow and ice removal, construction accidents, workplace injuries, defective products and medical malpractice. He is committed to protecting rights of victims of negligence to get them the just compensation that they deserve, whether it is from responsible parties and their insurers, or responsible city, state and federal government entities.

Since being admitted to the New York State Bar in 2013, Mr. Spivak has been selected by Super Lawyers to be listed as one of the New York Metro Area's Rising Stars for three consecutive years, an honor bestowed on only 2.5% of practicing attorneys under the age of 40 years old who have been practicing for 10 years or less. He has also recently been named to the National Trial Lawyers Top 40 Under 40 in The State of New York.

Mr. Spivak earned his J.D. degree from The Maurice A. Deane School of Law at Hofstra University. During law school, Mr. Spivak was a Public Justice Foundation Fellow and held several prestigious public service internships, including with the Office of the New York State Attorney General, a senior district judge of the federal court for the Eastern District of New York and with the general counsel's office of the NYC Patrolmen's Benevolent Association. He also served as an associate editor of the Hofstra Law Review and a member of the Hofstra Moot Court Board.

Mr. Spivak is a member of the New York State Trial Lawyers Association. He is also fluent in Russian and is committed to comprehensively addressing the needs of the Russian-speaking community.