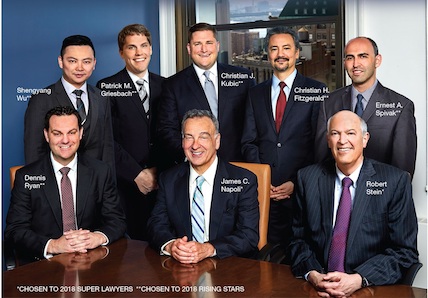 Serious accidents occur every day in New York City — leaving innocent victims to deal with the aftermath. Working to overcome an injury, cover mounting medical bills, deal with insurance companies, and recover lost wages cannot be done effectively unless you have help from an experienced attorney. At Caesar and Napoli, P.C., we are dedicated to representing injured victims. We will fight for you, protect your rights, and work to reach the best possible outcome for your case.

Caesar and Napoli, P.C. is a law firm in New York City that is focused 100 percent on personal injury cases. We represent victims and never advocate for insurance companies or large corporations. Our attorneys have years of experience and frequently receive referrals from past clients. Client service is, and always has been, our top priority.

Construction sites are inherently dangerous due to large machinery, moving materials, and unguarded heights, and even the most careful construction worker may be susceptible to harm. Construction accidents are often caused by improper shortcuts and oversights in ensuring that the proper safety measures are in place. If you were injured in a construction accident, you may be able to recover compensation. The type of claim that you can assert will depend on whether you were an employee at the time of the accident, whether the accident was caused by a third party's negligence, and whether a violation of the New York Labor Law occurred.

Car accidents frequently occur throughout the New York City area, and many collisions cause serious injuries. Most car accidents are caused by careless behavior, such as driving too fast, failing to yield, or driving while distracted. People injured in car accidents can seek damages from the party that caused their harm, which is typically done via a negligence claim asserted in a civil lawsuit. Our New York injury attorneys can help victims recover compensation for medical bills, lost income, and other costs associated with the accident. We also can assist them in pursuing damages for their pain and suffering.

Commercial trucks weigh several tons and are often unable to stop or decelerate quickly. Thus, when trucks are involved in accidents, they may cause devastating harm or death. Truck accidents are often caused by a truck driver's failure to adhere to federal safety regulations, such as limitations regarding drive times, truck weights, and truck inspections. Truck accidents may also be caused by negligent driving, such as a truck driver's failure to check one of the blind spots on the truck. If you were injured in a truck accident, you may be owed damages from the driver and, if the driver was working for a trucking company at the time of the accident, from the driver's employer as well.

September 11, 2001, was a day that caused irreparable harm to our nation, and the harm continued well after that day. Many of the first responders and people living in New York during 9/11 suffer from mental, physical, and environmental illnesses caused by the collapse of the twin towers. If you are suffering from a post-9/11 illness, our New York injury lawyers can help you pursue benefits under the James L. Zadroga 9/11 Health & Compensation Act. This law provides compensation to people living in the area deemed the exposure zone on 9/11 to compensate for any economic and non-economic harm caused by a 9/11-induced illness.

People often encounter dangerous conditions on property owned by someone else, such as snow or ice on a sidewalk or parking lot, food or liquid on the floor of a restaurant or grocery store, or uneven pavement. In New York, property owners have a duty of reasonable care to prevent foreseeable harm to anyone who enters their property. Thus, if you were injured by a dangerous condition on someone else’s property, you may be able to recover compensation from the owner of the property in a premises liability claim. Whether the property owner is liable for your harm will depend, in part, on whether the property owner knew or should have known of the condition prior to your injury.

Many workplaces, such as construction sites, warehouses, and factories, pose a risk of harm to workers, and workplace injuries are common. If you suffered an injury at work, you may be able to recover compensation from more than one source. For example, if your injury arose out of and during the course of your work, you may be owed workers' compensation benefits from your employer. If your harm was caused by the negligence of a third party, such as a general contractor or the manufacturer of a defective machine, an injury lawyer in New York can help you pursue a third-party personal injury claim as well.

If you suffered the loss of a loved one due to the reckless or careless acts of another person or entity, you may be able to recover compensation for the damages caused by your loved one's death via a wrongful death claim. In New York, wrongful death claims are governed by statute. The statute permits the personal representative of a deceased person’s estate to seek damages for the negligence or wrongful act that caused the person's death. The damages recoverable include funeral and burial costs, as well as compensation for the value of the support and companionship provided by the deceased person. Wrongful death claims must be pursued within two years of the victim’s death.

While law enforcement officers sometimes must use force in performing their duties, they do not have a blank check. Unfortunately, incidents of excessive force, police brutality, false arrests, and false imprisonment have become increasingly widespread, causing serious injuries and losses to many victims. Someone who has been injured by a law enforcement officer may be able to pursue compensation under 42 U.S.C. Section 1983. This law provides a right to sue when someone who was acting under color of law violated the constitutional rights of a citizen. If you believe that a government official may have violated your rights, you should speak with an injury lawyer in New York about whether you should bring a claim.

Opioid addiction is an epidemic affecting the nation, and no subset of society is immune to its grasp. People often develop an addiction after they are prescribed opioids following an injury or surgery, or to manage chronic pain. If you or someone in your family has developed an opioid addiction, you may be able to hold another party accountable for the injuries and losses caused by the addiction. For example, you may be able to pursue a claim against the pharmaceutical company that developed the opioid for failing to properly warn of the addictive nature of the medication or for using improper marketing tactics. You may also be able to pursue a claim against the pharmacy that filled the prescription if it knew or should have known that the customer was abusing the medication, or against the doctor who prescribed the medication if it was not necessary.

Some people who are supposed to care for children actively cause harm to them. People who may engage in abuse include daycare workers, religious clergy, school teachers, and coaches. If your child was abused, in addition to any criminal charges filed by the State, you may be able to pursue compensation from the person who caused your child’s harm in a civil lawsuit. Additionally, if that person was working for someone else when the abuse occurred, you may be able to pursue claims against their employer for negligently hiring the person or negligently entrusting the person with the care of your child.

Victims and their loved ones should not need to bear the costs of injuries caused by someone else's negligence. The personal injury attorneys at Caesar & Napoli have the knowledge and experience needed to help you set forth a compelling case in favor of your recovery of damages. We represent victims and families in Manhattan, Brooklyn, Queens, the Bronx, Staten Island, and Nassau, Suffolk, and Westchester Counties. You can reach us at (212) 226-2100 or via the online form to schedule a free consultation.